(Note:  When I was preparing my brief remarks for the informal memorial service being held on 24 July 2016 for George Cameron Hurst III in the Lawrence residence of his son Ian, I went on the internet to study the speeches of Melania Trump, to see if there’s anything I could borrow, but there’s nothing there, no there there, so I’m left to my own devices.  Here’s the text of what I wrote and shared with Cappy’s family and friends in Lawrence, KS.)

Reading Cappy Hurst’s obituary in the Lawrence Journal-World reminded me of the fact that Cappy and I both arrived at the University of Kansas in the hectic and tumultuous days of 1969. Because Cappy and my good friend Grant Goodman were both Japanologists, Cappy was among the first people I met socially.

He was trim, tanned, athletic, good-looking, the very picture of the Golden Boy from California. If I remember correctly, he also sported a gold tooth which, whenever he smiled, sparkled and twinkled, like the romantic heroes in the Hollywood movies of a bygone era.

Cappy loved the movies, but the movies we talked about were not Hollywood movies. They were, not surprisingly, given his scholarly academic publication on The Armed Martial Arts of Japan, and his own personal achievement as a black belt in Tae Kwon Do, the movies he loved were the Samurai movies of Mifune, directed by Kurosawa, films like Rashomon, Seven Samurai, Sanjuro, Yojimbo, The Hidden Fortress.

Unlike many gathered here today, I did not manage to keep in touch personally with Cappy after he left Lawrence and the University of Kansas in 1995. What news I had of him and his failing health in recent years, came from Grant Goodman. And when Grant himself passed away in April of 2014, I no longer had any news of Cappy, until I saw his unexpected obituary in the local paper on 10 July 2016.

My best memory of Cappy goes back to 1978, when I needed a young child to pose for a poster for my play HOMERICA, which was being presented with great fanfare in the ballroom of the Kansas Union. I asked Cappy if we could borrow his son Ian for the picture, and Cappy not only agreed, he himself accompanied Ian to the photo shoot. I looked at the poster again today, and was startled to see, not Ian, but Cappy staring back at me, reminding me of what the poet William Wordsworth said, that “the child is father of the man.” 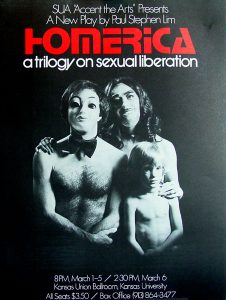 Precisely because I did not see Cappy after 1995, I have no visual image of him in my mind after 1995, of when he was no longer young and vital. The obituary in the paper said he was 75 years old. That can’t be true, because for me he is, in the words of Bob Dylan, forever young: