OUT ON A LIM

So, it’s Romney and Ryan, the Republican Dream Team for November.  Going into the campaign, what will the R-R combo remind you of?  The Rolls-Royce of billionaires?  The Retro-Repo Men?  The Rail-Roading of America?

What happens to Ann Romney’s dancing horse Rafalca now that the poor beast has flunked out of the Olympic dressage competitions in London?  Given all the negative publicity about this poor rich mare (surely a nightmare for Mitt’s handlers), will the Romneys continue to take Rafalca’s $77,000-a-year upkeep off their tax deductions?  Or will they put her out to pasture somewhere in Massachusetts where she might possibly qualify for Romneycare?  Or will they sell her off to manufacturers of puppy chow and hope the newshounds never find out?  What do the neigh-sayers say?

Clint Eastwood’s endorsement of Mitt Romney in Idaho last Friday did not really surprise me.  The endorsement probably made Mitt’s day, but whether this will have any SUDDEN IMPACT on the electorate, or raise A FEW DOLLARS MORE for the billionaire’s presidential campaign, remains to be seen.

Actually, I have a confession to make.  I have NEVER liked any of Clint Eastwood’s movies (neither the ones he’s appeared in, nor the ones he’s directed), so now in my book he joins the ranks of two other Hollywood gun-toting Republican icons, John Wayne and Charlton Heston, all of whose movies I can not bear to watch either.

If Barack Obama wins the presidential election this November, Clint Eastwood might have to remake some of his movies—“Million Dollar Baby,” “Play Misty for Me,” “True Crime,” etc.  And he’ll have to rename some others if he chooses to remake them as well—“Every Which Way But Lose,” “White House Black Heart,” “Magnum Farce,” “Dirty Barry,” etc.

Can Democrats with elephantine memories ever forgive Clint for choosing Mitt over Barack? Or will he now be banished to the Hollywood equivalent of ALCATRAZ, to remain forever among the UNFORGIVEN?

The Lawrence Journal-World reports that former Kansas University forward Thomas Robinson “fought off the tears” when he learned that the Sacramento Kings had made him their choice in the first round of this year’s NBA draft.  “I made it,” Robinson was quoted as saying, exhaling between sentences. “I mean, I made it…”

Meanwhile, we are told, “it came as a relief” for ex-Jayhawk Tyshawn Taylor when he was finally taken with the 41st pick by the Portland Trail Blazers, who traded his rights to the Brooklyn Nets. “I was just staying ready, being alert, and just being happy, looking forward to the opportunity,” Taylor was quoted as saying. “I knew that any team that was going to take me was going to want to play me right away.”

While reading all this, suddenly, in the background, I hear Roberta Flack singing, “The First Time, Ever I Saw Your Face…”  And then the song fades to another one by Sarah McLachlan, who looks at me mournfully and says, “Every ten seconds in America, an animal is beaten or abused…”

Voters in Wisconsin get to decide at the polls today whether to keep Gov. Scott Walker or to kick him out of office. Besides Nancy Sinatra’s “These Boots Were Made for Walker,” a lot of other pop songs come to mind which seem peculiarly appropriate for whatever outcome awaits the governor at the end of the day.

There’s “I’m Walking” (Ricky Nelson), “I’m Walking Behind You” (Eddie Fisher), “Walkin’ My Baby Back Home” and “Just Walkin’ in the Rain” (Johnnie Ray), “Walk Don’t Run” (The Ventures), “Walk on By” (Dionne Warwick), “Walk on the Wild Side” (Lou Reed), “Just a Closer Walk with Thee” (The Right-Wing Evangelicals) and, of course, the all-time weepie from Carousel, “You’ll Never Walk Alone.”

KeeWee, the new queen of my household, is two years old today.  Back in Holland, her noble ancestors were bred to guard the barges, but she did not want to have a thousand barges floating ostentatiously down the Kaw to mark her special day.  Her Royal Highness prefers to celebrate quietly with her favorite sweet potato treats tonight. 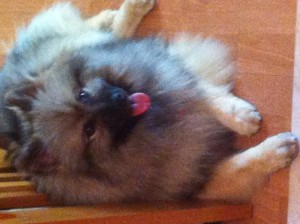 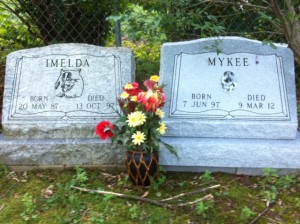 Some friends and I are spending the afternoon of this Memorial Day watching an opera on DVD, a performance of Leos Janacek’s FROM THE HOUSE OF THE DEAD.  Afterwards, we will go to the backyard to spend a few moments with my two faithful and valiant pups, IMELDA (20 May 1987–13 October 1997) and MYKEE (7 June 1997–9 March 2012).  Hardly a day goes by when I do not think about how they both enriched my life, and today we will drink a toast to their memory.

Although I’m a lapsed Catholic, every year on Good Friday I have some friends over to observe the holyday in some fashion. At last year’s gathering, I served Rusty Nails along with Hot Cross Buns from Wheatfield’s Bakery in Lawrence. Any suggestions for what I should offer my guests this year?  WWJD?  The “D” is for “Drink.”

Now that former Vice President Dick Cheney has had a successful heart transplant, I cannot help but wonder whether the organ donor was a Democrat, an American who voted for Change in the last election.  Will the hugely disgruntled and mostly dyspeptic 71-year-old Cheney now have a sudden change of heart  to become a kinder, gentler human being?  Will he be sorry now for  his position on torture, on weapons of mass destruction, on any liberal who dares to cross his path?  In a heartbeat, can He Who Must Be Obeyed turn into He Who Will Support The President Of His Country?

I am grateful for all the comforting words and sentiments which have been sent my way ever since I shared the sad news of Mykee’s death.  While I am still trying to decide whether or not to get another keeshond to fill the void which Mykee left behind, yesterday I bought a young canary, to join the pair of lovebirds which I’ve had in the house for a long time.

Although the lovebirds nestle together affectionately, and I find eggs regularly in their cage as proof of their affection, they don’t really sing to each other; they mostly just squeak and squawk, so I’ve named them Gustav and Alma (after the Mahlers).

The young canary has adjusted well to his new environment. He seems happy.  It’s only been one day, but already my house is filled with his sunny disposition, his thrilling trill and cheerful chatter. Maybe he’ll inspire Gustav and Alma to sing a different tune.

I have yet to name the young male canary.  I’m thinking of Johann (after Bach), or maybe Papageno (after the character in Mozart’s The Magic Flute, my favorite opera).  Any suggestions?