“All the world’s a stage, and all the men and women merely players… One man in his time plays many parts, his acts being seven ages. At first the infant, mewling and puking in the nurse’s arms.  And then the whining school-boy… the lover,  sighing… a soldier, full of strange oaths… the justice, in fair round belly… The sixth age shifts into… the pantaloon, with spectacles on nose and pouch on side… Last scene of all, that ends this strange eventful history, is second childishness and mere oblivion: sans teeth, sans eyes, sans taste, sans everything.”

Although I’m calling this website “a personal memoir in flux,” it is also my hope that the various sections will be of interest to people, whether they know me or not. “Out on a Lim” shares short observations on day-to-day life. “Limerances” chronicles longer remembrances of things past. “Limoscenes” presents descriptions of the plays I’ve written to date, with production photos. “Images in Limbo” shows pictures of the aging process, of me with family and friends. “Limpets” are the non-human dogs in my life, and “Limitations” are tributes to people who are no longer with us. So here I am, past imperfect, present progressive, future tense. Let me know what you think. — Paul

Why Massenet’s CENDRILLON Makes Me Sad.

As delightful as the Metropolitan Opera’s new production of Massenet’s CENDRILLON was, which I was fortunate to have seen on opening night Thursday, the whole evening was filled with melancholy for me, because my mind drifted back to Milan in the late 1970s, when I “saw” this opera for the first time at La Scala.

My friend Grant Goodman and I were spending the summer in Italy, and Milan was the second stop on the itinerary. We had just toured the magnificent Duomo, including the breath-taking rococo steeples on the expansive rooftop, and now we were just sauntering around the plaza near La Scala. Frederica von Stade, one of Grant’s favorite singers, was appearing in a production of Massenet’s CENDRILLON, but we didn’t have tickets. Luckily, we were soon approached by a scalper who offered two tickets at exorbitant prices, even though he admitted one of the seats had “a limited view of the stage.” Grant paid no heed, and paid for the tickets.

The seats were on the last row of the uppermost balcony, and my seat, the one with “a limited view of the stage,” was actually behind a white column around which I had to shift, now left and now right, in order to catch a glimpse of what’s going on below. I soon gave up, and settled back with my eyes closed, content to just listen. Grant laughed uproariously through much of the evening. He did offer to trade seats with me a number of times, but he was enjoying the opera too much for me to deny him the full experience.

At the end of that summer, and for many years afterwards, Grant said that seeing his beloved Frederica von Stade in Massenet’s CENDRILLON In Milan was an unexpected dream come true, and that I was such a good sport to watch the whole opera with him from behind a white column on the last row of the uppermost balcony at La Scala.

At the Metropolitan Opera the other night, my seat in the center section of the orchestra was six rows from the stage. But, as delightful as the production was, as luminous as Joyce DiDonato always is, I closed my eyes, listening to the music, pretending that Grant Goodman was still sitting beside me, laughing throughout the evening, even though it has now been four years since he died and left us, and I was sad.

If there’s any truth to all these allegations about POTUS and Russian prostitutes urinating on each other, then how can POTUS accuse James Comey of being a “leaker” concerned only with sales for his upcoming tell-all book? Think “liquid assets.” Talk about YELLOW JOURNALISM!

At a performance of Donizetti’s LUCIA DI LAMMERMOOR at the Metropolitsn Opera in New York last night, before the opera began and also during the first of three lengthy intermissions, an older woman sitting on my left, of great intelligence and girth, engaged me in a stimulating conversation about our favorite operas and singers. She surprised me at one point when she asked me my age. I said 74, and she said she’s 80. Anyway, after the first intermission, she seemed to fall asleep, and soon her enormous right hand fell on my left knee. Not only that, but every time she shifted her sizable frame, the hand in question began to inch up my thigh. What would you have done had you been sitting next to her? What do you think I did? If I post this strange encounter on Facebook, will Mark Zuckerberg sell her my name, address, phone number, and also all my vitals?

11 January 2017: Poll Dancers at the Inauguration?

Because the Trump Transition Team has been unable to line up real celebrities for the January 20 inauguration of DJT, it has just been announced by the Team that they will go instead for “soft sensuality.”  Although this sounds vaguely pornographic, or something we might expect in an ad for huuuuge condoms the size of The Donald’s hands, I’m sure the Team has other things in mind by way of entertainment.  Is the aging Sylvester Stallone going to run up and down the steps of the Capitol as ROCKY on Viagra?  Better still, given The Donald’s obsession with ratings and polls, is it possible we’ll see the Rockettes performing as POLL DANCERS?  Get ready for “soft sensuality,” everyone.  Be sure to stock up on lubricants to ease The Donald’s entry into the White House, a penetration aided perhaps by none other than Vlad the Impaler.

“Younger Than Springtime” with KeeWee 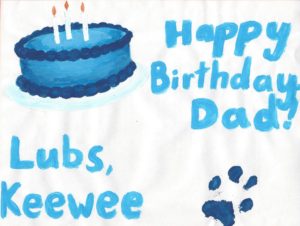 Of the many wonderful cards and e-greetings I received recently on my birthday, the one that made me feel “younger than springtime” was from KeeWee (with a little help from Julie Jacob), whose card showed a cake with three candles on it, suggesting that, in dog years, I am only 21 years old.

9 January 2017: Who Is Trump Wearing To The Inauguration?

According to DJT:  “We are going to have an unbelievable, perhaps record-setting turnout for the inauguration, and there will be plenty of movie and entertainment stars.  All the dress shops are sold out in Washington. It’s hard to find a great dress for the inauguration.”

If DJT is having trouble finding a great dress to wear to his own inauguration, perhaps he could look through wife Melania’s closets.

8 January 2017: Still Bristling After All These Years!

On my last visit to the dentist, my hygienist recommended a particular brand of electric toothbrush, so last week I went to a store in town, and was delighted that not only was the item on sale with my 20% off holiday coupon, but that the manufacturer of the item was also offering a $35 rebate—all you had to do was fill out a form, attach the store receipt and the bar code from the box, and mail it in.  Okay, I did all that as soon as I got home, even as the $200 electric toothbrush was charging itself for 24 hours prior to initial use.

So, 24 hours later, I finally tried to use this wonderful gadget.  I didn’t mind the toothpaste flying up toward the ceiling when I turned on the toothbrush; I didn’t mind drooling like I haven’t drooled since I was a babe in swaddling clothes; I didn’t mind the terrible grinding sound whenever I hit my teeth with the plastic part of the toothbrush; but I was alarmed when my gums started to bleed.  Perhaps I wasn’t doing it right, so I tried brushing in different positions, including lying on my back so I would drool inward, not outward and downward, but all with the same bloody result.

Finally, today, I gave up, and brought the item in its original box back to the store.  The clerk asked me what was wrong with the product, and I related my experience.  I also told her that I had already mailed in the $35 rebate, and asked what I should do about that.  The store manager happened to be standing nearby, overheard the whole thing, and said I would not only get a full refund from the store, but that I could also keep the $35 rebate from the manufacturer if and when it arrives.

The sales clerk looked truly surprised by this information and said under her breath, “So why don’t we all just buy things, send in for rebates, then return the items?”  Bristling through clenched teeth and bloody gums, I asked her if she really thought that I would consider doing something like that.

The store manager was mortified, apologized profusely for the clerk, and took over the rest of the transaction.  Tonight, before going to bed, I’ll brush my teeth the old fashioned way, manually, still bristling after all these years.

Donald Trump has postponed “until sometime next month” the revelation of how he plans to resolve all potential conflicts of interest arising from his vast business empire in light of his  ascendency to the American presidency.  In the past, he has always said that the business will be passed on to three of his four adult children—Ivanka, Eric and Donald, Jr.  No mention of poor Tiffany, ever, so she can have breakfast anywhere she wants.  In his most recent tweet, however, The Donald names only Eric and Donald, Jr., leaving out his favorite child Ivanka, reducing her to the same non-status as Tiffany.

So what’s going on?  Has Ivanka displeased her father in some way because she believes in climate change?  Was she overly ambitious when she pushed her way into meetings with visiting heads of state in order to push her own clothing line?  Did she refuse to declare more publicly her love and loyalty for the erratic patriarch?  Will her two male siblings now inherit her share of the earth owned by King Lear at Trump Tower?   Is this tragedy or comedy?  Will it all end with cries of anguish or gales of laughter?  “Howl, howl, howl, howl!”

People who know Donald J. Trump all say that there is a Public Trump and a Private Trump, as the whole world waits to see which Trump is going to emerge in the days following the election.  Meanwhile, I am rereading T.S. Eliot:

In the room the many molested women come and go
Talking of Donald J. Trump.”

Donald Trump wonders why the grieving Ghazala Khan did not speak as she stood beside her husband Khizr at the Democratic Convention in Philadelphia last week.  Trump suggests that as a Muslim woman, Mrs. Khan has been silenced.  She has since then spoken out, a lot, about how Trump misunderstood a mother’s grief for the subjugation of Muslim women.

So far, no one has wondered about the silence of Donald Trump’s first two wives, Ivana and Marla.  Is it possible that, under the lucrative terms of their respective divorce proceedings and settlements, these two women have been paid off to keep quiet?  As for Trump’s third and present wife Melania, we know that she can speak publicly, but that her words are worthless because they are plagiarized and not her own.  Enough said.